At the PCPD, Chase arrives in his softball uniform to see Dante. Dante is happy to have him back, but Chase explains that his suspension is still 54 days. He’s only there to sign people up for the team. While they are talking, Brook Lynn arrives and Dante realizes that Chase has developed feelings for her. Chase asks Dante, regardless of his past with her, to give him a chance.

In the interrogation room, Trina is stunned that Spencer asked her why she did it. He points out that there is evidence, but she claims she was framed by Esme. Spencer reminds her that he and Esme left the cabin, and that she was drunk and very upset that night. Spencer is in no position to judge and he wants to believe her. Trina asks, “Then why can’t you?” Trina reminds him that he knows what Esme is capable of. Spencer says he was the instigator and everything she did was because she loved him. Trina says the difference is that she would never hurt someone for someone she loved. Spencer reminds him that she lied for him. 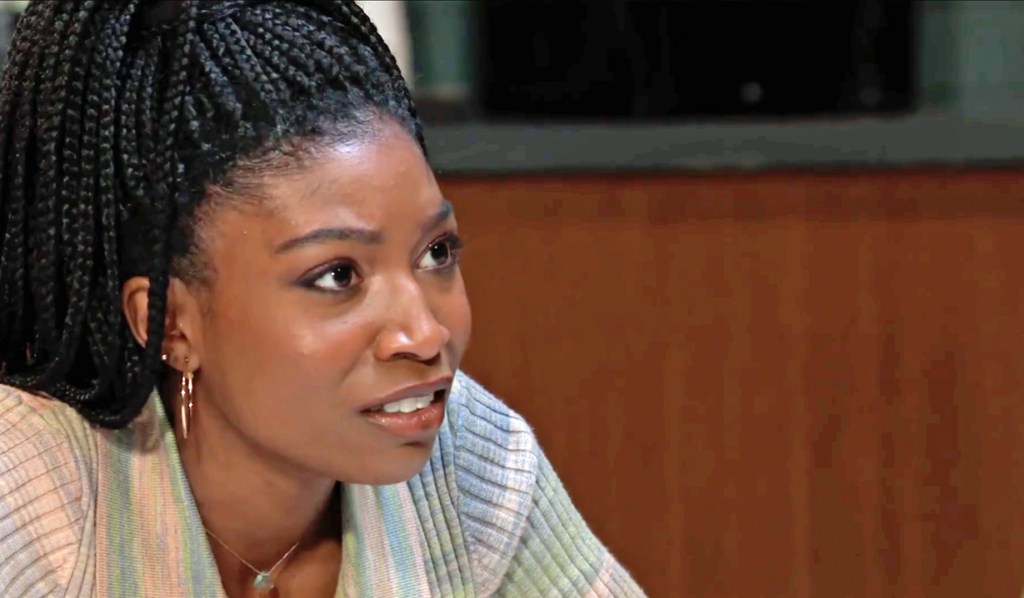 Trina argues that it doesn’t compare to making a sex tape and posting it. She trusted him when everyone else hadn’t, and realizes he’s still blind to Esme after everything she’s done. Spencer reveals that Esme may be carrying his child. Trina realizes that’s why he has to see the best in Esme and the worst in her. Trina says that since she met him, her life has gotten worse, and now she’s arrested because of her girlfriend’s lies. Trina says if he can’t look her in the eye and believe her, it’s over. When he flounders, she angrily orders him out and suggests he go see Esme. Officer Cabrera (played by Michael Blake Kruse) sees him out. 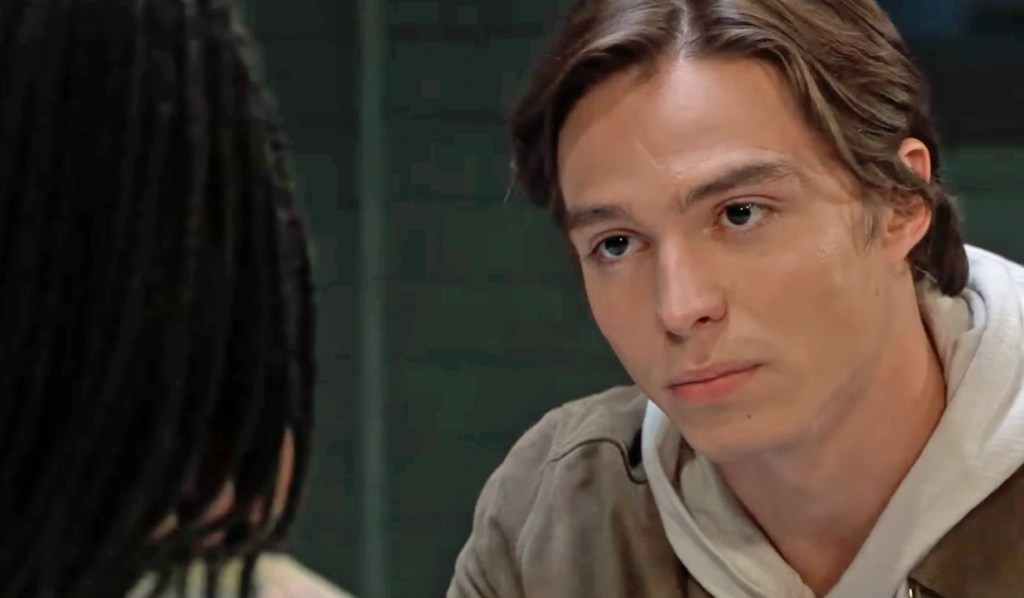 Curtis and Portia meet with Scott at the hospital to discuss Trina’s case. Scott is sorry this happened to Trina, and he’s looked into the matter. Scott thinks Trina is innocent and sees plenty of opportunities in the evidence to cast doubt. He plans for Cam and Joss to make statements supporting Trina. Scott notes that Trina’s character says a lot about her and that Portia has a great reputation as well. Scott says he sees Cam as his grandson, so he’ll never represent anyone he thinks would do this to him. Curtis realizes that the arraignment is imminent. Scott says he’ll see them there and rushes off. Portia breaks down and Curtis assures her that everything will be fine. 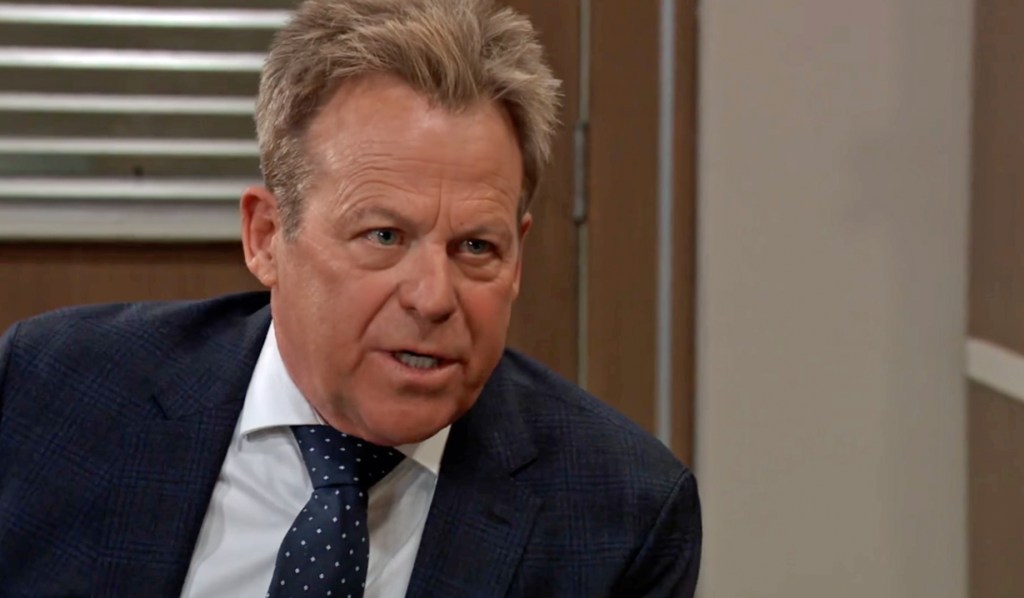 Curtis and Portia arrive in the team room and the doctor sees Spencer. Portia is furious and can’t believe he would show his face after what his girlfriend did to her daughter. She tells him she doesn’t have time to take care of him today. Dante suggests that Spencer get out of there as his presence is not useful.

In the interrogation room, Officer Cabrera hands Trina a cup of water and smiles at her. Trina returns a smile. Portia and Curtis arrive to see her, and Portia explains that Scott is going to be her lawyer and that he believes in her. They all leave for his appearance before the judge.

At Deception’s office, Lucy, Brook Lynn and Maxie celebrate as their IPO is about to hit the market. They start working on the launch party, and Lucy wants Amy and Chase to sing there. Brook Lynn looks uncomfortable. Gladys interrupts and wants to talk about stock options. Instead, Lucy sends him to get their lunch. Lucy again asks Brook Lynn to blackmail Chase, but she refuses. She feels that she would benefit from their friendship. Maxie thinks they owe Chase enough to explore other options. Lucy advises Maxie to reason with herself, then BLQ. She rushes in screaming that she needs candy. 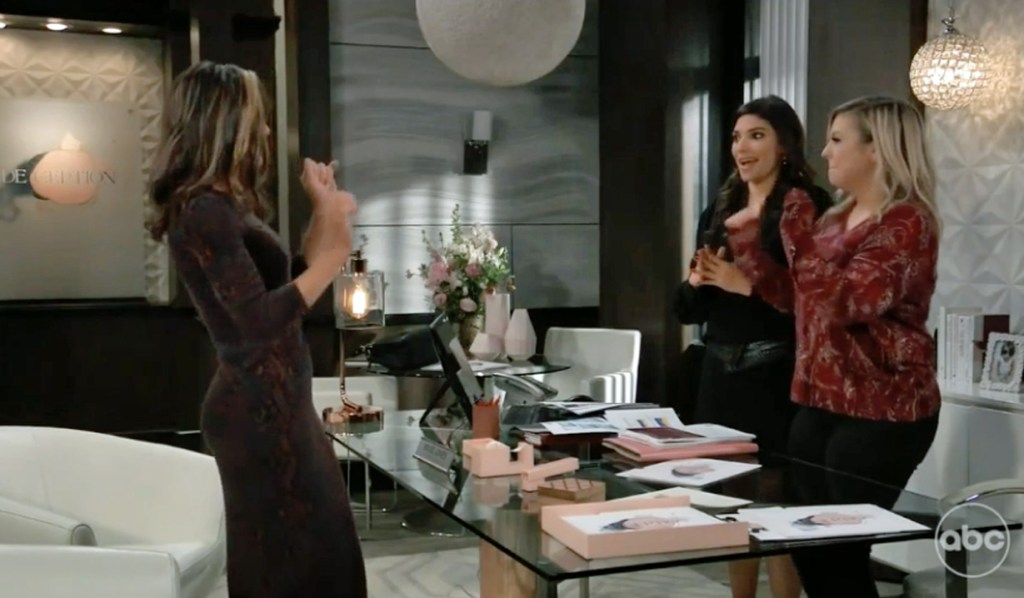 Alone, Maxie asks BLQ what is going on. Brook Lynn admits she has feelings for Chase, but he clarified that they are just friends. Suddenly, they hear Lucy talking to Chase in the hallway, and Maxie pushes Brook Lynn to see him. Maxie asks what brings him up, and he explains that he’s recruiting for the softball team. Maxie finds an excuse for Lucy to go find Gladys and they leave them alone. 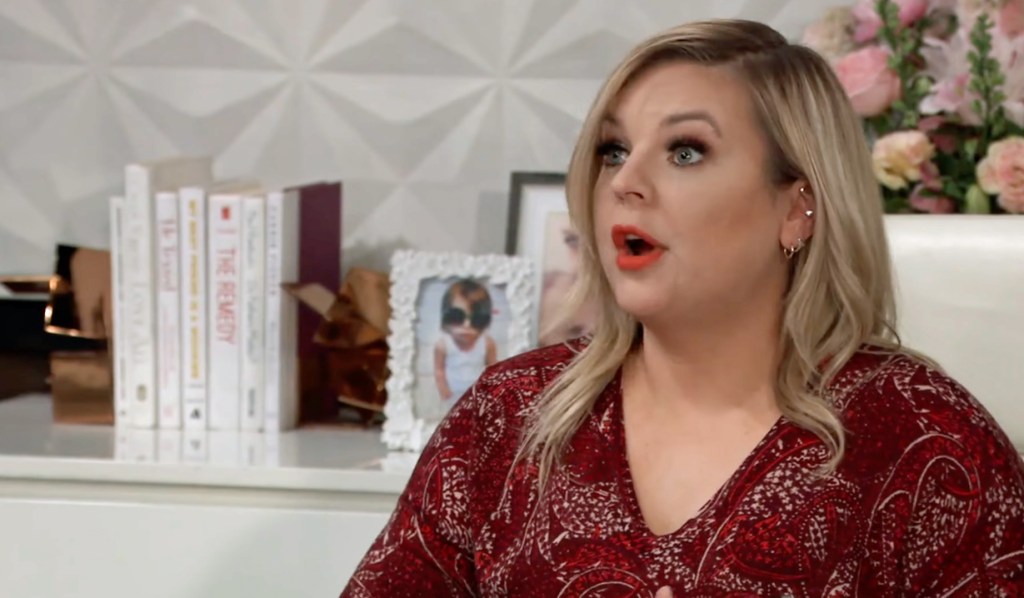 BLQ tells Chase that Lucy needs singers for the party and wants him to sing the duet with Amy. She says she would like to have him there, and he smiles. However, Chase is no performer, and he has to keep looking good with his suspension almost up. He feels like singing for a cosmetics company might not look good. BLQ understands, he does not fit into his world. She says she has to go back to work and tells him to close the door when going out. Chase is puzzled by his answer. 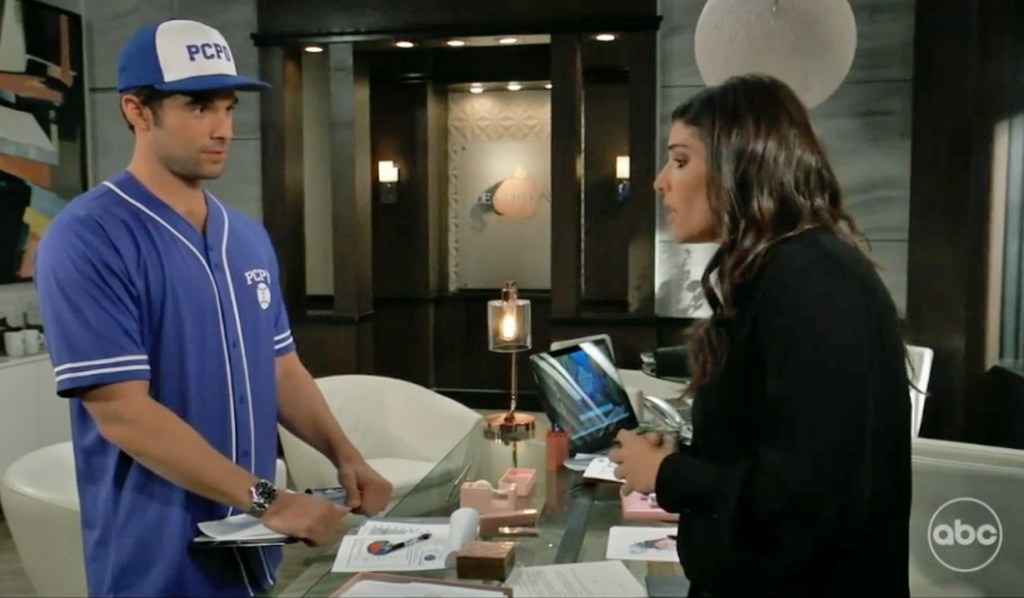 Brando and Sasha arrive at the Metro Court, still happy from their honeymoon. Brando points out that although they are married, they still don’t live together. Sasha says they will understand and she just wants to enjoy where they are and this feeling. 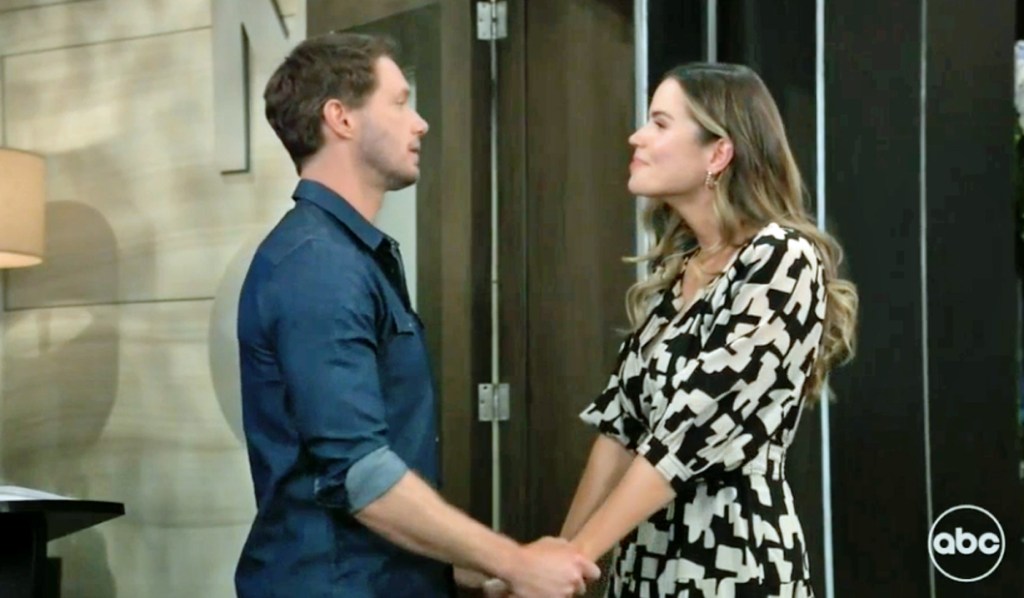 Gladys interrupts, kisses Brando and is happy to see them both again. They grab a table and Brando apologizes when he gets a call. Alone, Gladys tells Sasha that marriage is a big step forward and worries that they’ve rushed into it after all they’ve been through. Sasha knows it was an impulsive decision, but she loves Brando. Gladys knows she makes Brando happy, but she doesn’t want him to be hurt. Brando returns and reunites with Maxie and Lucy. They welcome Sasha and tell her about the IPO party. Lucy hands him the IPO wallet. When Sasha sees the photo of herself pregnant in the promotional material, she gets upset and apologizes. She rushes over and calls her dealer for more drugs. 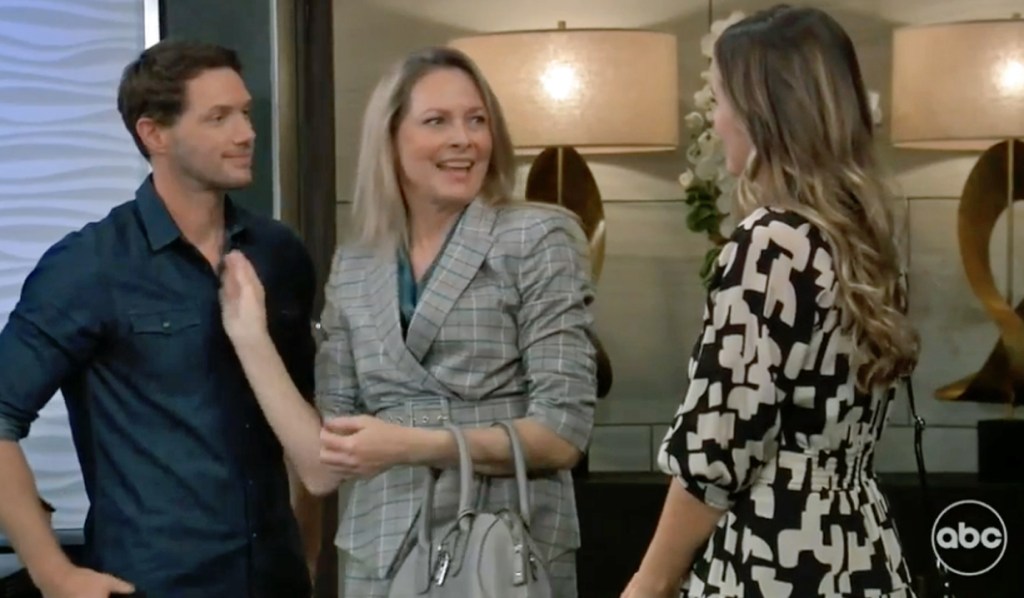 At Charlie’s, Nikolas becomes concerned when Victor informs him that he saw Esme getting into an expensive car. Nikolas knows she was hiding something from him when she went out for some fresh air. Victor reveals that Esme may be pregnant. Nikolas realizes that’s why she’s so emotional. Victor says if Esme is pregnant, they have to take care of it. Nikolas suggests they go somewhere private. As they exit, Nikolas calls Esme’s phone, only to find it on the floor. Nikolas reflects on Esme telling her how Joss’ parents are after her and realizes that Sonny has Esme. 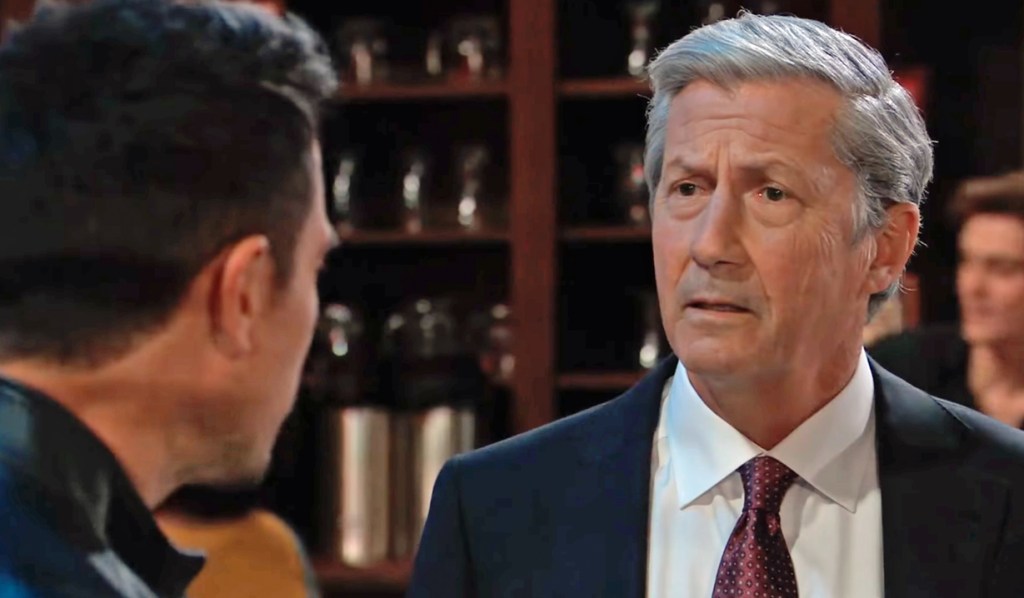 Continued: The lasting effect of the late Gloria Monty on GH

In Sonny’s office, Sonny thanks Esme for coming to talk to him and explains that it’s about what she did to Joss and Cam. Esme swears she didn’t do anything and the PCPD arrested Trina for the tape. Sonny knows Trina wouldn’t do that, and he’s a good judge of character. They resurrect all of Esme’s schemes with Spencer against Ava, which also included using her daughter Avery. Esme regrets what she did and she apologizes. Sonny notes that he has a long memory when someone hurts his family. He suggests that she save everyone a lot of time and admit that she was behind the tape. He points out that she hurt Nikolas, Ava, Avery, Joss and Cam, and that a young woman is now behind bars, but she can fix things by confessing. 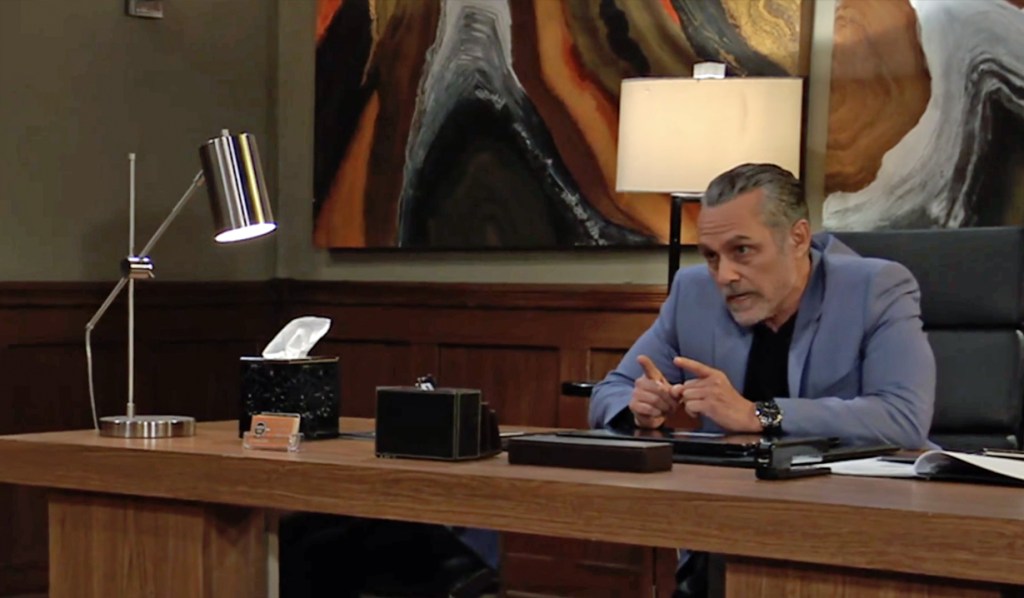 Victor and Nikolas arrive at the restaurant and ask Sonny’s bodyguard to let him see him. When Esme hears their voices, she screams, “Help me!” Esme runs out of the room and Nikolas asks Sonny what’s going on. Sonny explains that they are just talking. Nikolas takes Esme out and Sonny tells Victor they’re done. Victor disagrees and says they are just getting started. Victor warns him to stay away from his family. Sonny reminds her that Spencer is her family too. Victor warns him that the Cassadines always come out on top. Sonny tells Victor that if he wants to take the first shot, he will be the one to finish it. 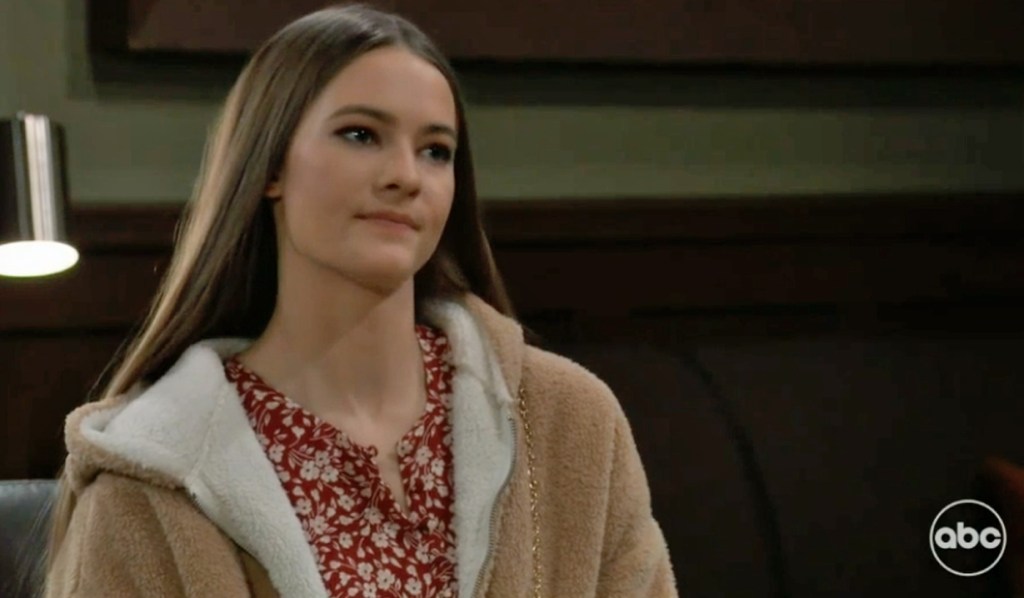 Nikolas brings Esme home to Charlie. She can’t thank him enough for saving her and jumps into his arms. Spencer walks in just then and sees them.

See you next time General Hospital: Scott tells Trina it’s her decision. Diane meets Michael and Willow with a legal strategy. Nina tells Maxie that she may have found someone to help her. Carly refuses to quit yoga when Nina comes to class. Esme yells at Nikolas and Spencer that she doesn’t know what to do to make people see that she didn’t post the tape.

Before you go, take a look at the top soap opera doctors in the gallery below.

Please note that if you purchase something by clicking a link in this story, we may receive a small commission from the sale.

Did you miss today’s episode? Catch up via Hulu.