This fall, the Kennedy Theater’s 59th production season will focus on a single main stage production. The University of Hawaii at the Department of Theater and Dance in Mānoa is working on Form within a form: echoes and reverberations, a transformative dance concert with a cast of 60 performers, featuring dynamic, interactive and powerfully innovative collaborations between original dance, music, mixed media, performing art and costume design. Audiences will be transported through a wide range of dance genres and traditions, including works created by international guest choreographers from the Korea National University of the Arts.

The National Endowment of the Arts gave the uh Mānoa College of Arts, Languages ​​and Letters a $10,000 production prize, which helped bring acclaimed artists Jae Hyuk Jung and Samjin Kim to the Mānoa campus to train students for a few special acts to perform in the concert. Both will serve as resident dance artists this fall.

Jung’s goal is to teach students to use repetitive movements as a method to skillfully combine two opposing elements of Korean tradition and contemporary. Kim’s choreography challenges dancers to blend movement using breathing and improvisational techniques.

“It’s very honorable and impressive, also because we learn about the culture from people who are directly immersed in it. So it’s a direct transfer of knowledge and it’s very instructive,” said Nani Marcosa dance BFA major to uh Manoa.

Marcos is a classically trained dancer from Waipahu and thrilled to have the opportunity to immerse herself in Indigenous contemporary dance practices, helping to expand her connection to the art form.

“In Korean dance, everything comes from your breath. From the musical phrases, you want to catch the rhythm of the music with that first breath that you take and that guides you through all your moves,” Marcos said.

Jung and Kim also hosted a series of free dance workshops for the public. Their residence at uh Mānoa has been making headlines in South Korea, and citizens are delighted that the traditions of their home country are being shared.

“After returning to Korea, many people are interested in this project because it is an opportunity to promote Korean dance through exchange,” Kim said. “I am very honored and grateful.” 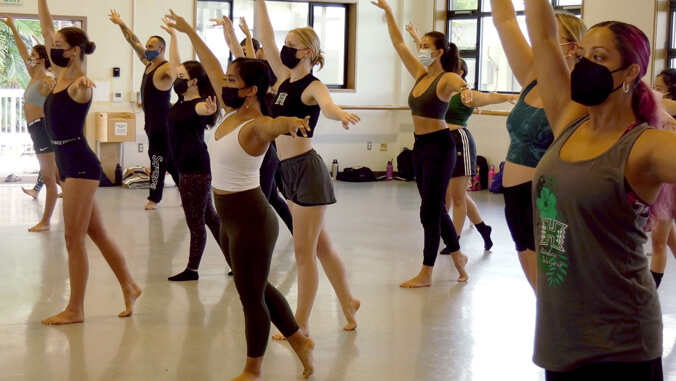